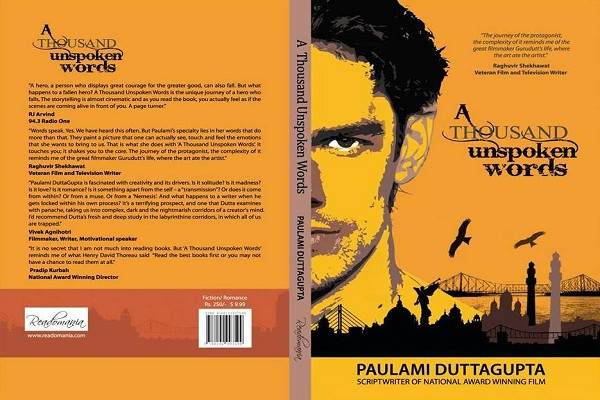 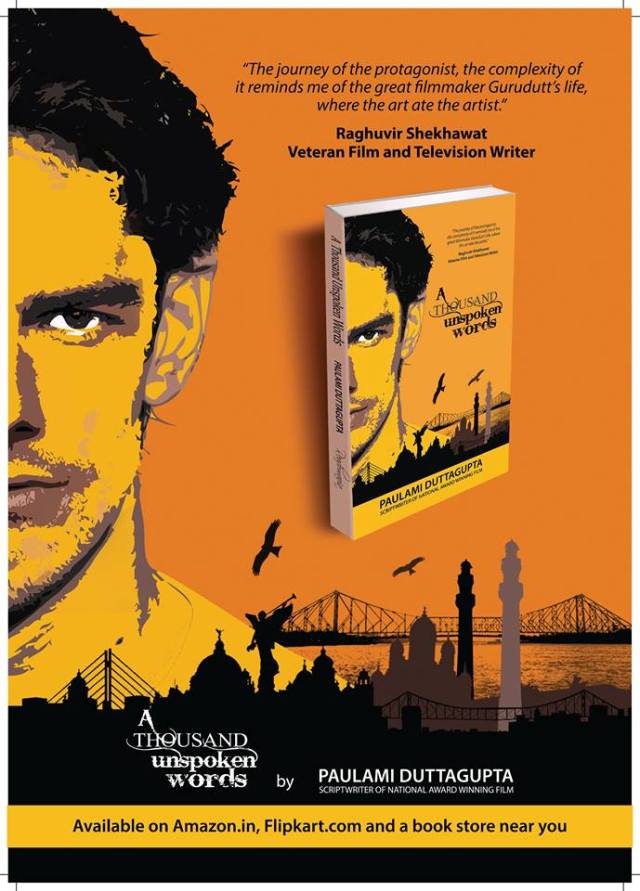 A few months ago, I was a part of literature conference in Pune’s Bharati Vidyapeeth University, where the main debate revolved around great literature and popular literature. The key note speaker concluded that popular literature gives you pleasure for few moments but great literature makes you a worried man i.e. it makes you think.Well, Paulami DuttaGupta’s fiction A Thousand Unspoken Words is one such bright example of contemporary classics. I must congratulate the author for taking up such a politically charged plot line and executing it in such a fine manner.

While most of the Indian English writer prefers to highlight the negative aspects of the Hindi Film industry , Paulami DuttaGupta actually borrows( read inspired) the pseudonym of a writer(in the book) from a Bhatiyali inspired tune of S.D Burman , which was featured in the  highly praised Bollywood  film , Guide (1965). Very few authors can create a mood, Dutta Gupta provides such everlasting moments throughout the novel. Chetan Anand’s Guide was based on R.K Narayan’s novel of the same name and like the novel this book provides an open ended climax, it is up to the readers to decide what to choose? Sequel ..ah Haan.

The novel is about one of the most miserable ideologies of the era, yep Communism. Bengal witnessed the advent of communism and its considerable decay over the time and across the decades. Dutta Gupta criticized the hypocrisy of Leftist bureaucracy of Bengal.  The book exposes the political crimes brainwashing in Bengal. However, they are never loud but yes as a sensitive reader it hits you really hard.

I have always loved resilient characterization in novels. This one has Tilottoma and Riddhiman. You will enjoy the conversation between the characters, their dormant traits and the duality. Musafir appears as a robust political writer with a considerable amount of fiery fans. Tillotomma is the bravest and the brightest among them all. I have never revealed the plot line, but yes I can give you a hint-this one is a romance but not a coochie cool one. This book traces the emotional journey of the characters, their struggle with ideologies and of course the constant struggle ( read battling inner demons). This one is psychic and yet simple. Paulami DuttaGupta didn’t fall prey to the pseudo-intellectual mode and bombard the readers with out of the context sequences and GRE’s vocabulary. The book makes you reflect upon the ideologies of the society and it raises questions like the pen which propagate such ideologies, do they follow it by themselves? One who looks like an idealist turns out to be something else in the end and as a reader, it might crush you. The story is not about two persons falling in love but it is about surviving through it and discovering new aspects throughout the journey. The author did a decent job in providing the readers with realistic characters and in reality, people are selfish as hell. I must say, the author has chosen most of the rasas to deal with the art of characterization. The protagonists fall in love only to depart and the story is all about the pent of emotions which are yet to be exchanged i.e. those thousand unspoken words.

This book has got a heart at its right place and the read was indeed soulful. Ah, classic after a very long time. I’m going to read all other works by the author and I dare you to miss this one. Go get a copy of A Thousand Unspoken Words.Mani Ratnam might enjoy adapting this classic on the silver screen.

Kick ass Plot line( Bashes up the Commies, hits the Inqilab Zindabad mouthing Jack ass  idealists of Jadavpur University and Presidency University who are communist until they get rich ..take that.)

Hard Hitting Characters who are like us and still exclusive in their own accord.

The last phrase “She smiled sadly”, is engrossing.

Paulami DuttaGupta is a novelist and screenwriter. She shuttles between Kolkata and Shillong. She has worked as a radio artist, copywriter, journalist and a television analyst at various stages of her life, having been associated with AIR Shillong, The Times of India— Guwahati, Shillong Plus, ETV Bangla, The Shillong Times, Akash Bangla and Sony Aath.As an author, her short stories have appeared in various anthologies and literary magazines. A Thousand Unspoken Words is her fourth book. Paulami also writes on politics, social issues and cinema. Her articles have appeared in Swarajya, The Forthright and NElive.
Paulami is associated with cinema and her first film, Ri-Homeland of Uncertainty received the National Award for the Best Khasi Film. Her second film Onaatah—Of the Earth is at post production stage and will release in 2016. She is currently working on her third screenplay. A short film tentatively titled ‘Patjhar’ is also in the pipeline.
Paulami is a complete foodie and is almost obsessed with watching one film every day. She also loves reading—political and social commentaries are her favourite genre. Literature classics and books on cricket are also a part of her library, apart from a huge collection of romances. Jane Austen’s fictional character Mr. Darcy is her lifelong companion. She is an ardent fan of Rahul Dravid and has been following all news about him for almost twenty years now.

It is a mirage about the phenomenon called LIFE

What so good about GoodReads